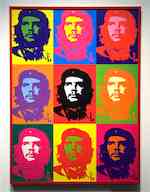 The Life and Afterlife of Ernesto Guevara

Latin American History in the Age of Che

The 20th century was an age of heroic aspirations in Latin America. It was an age of both intensely humane and intensely horrendous acts, made in the context of trying political, social, and economic structures. This class will consider the history of Latin America as a region through a series of case studies that intersected with the life and afterlife of Ernesto Guevara de la Serna. More specifically, the life and after life of Che will serve as a node of exploration to the many branches of Latin American social, political, and economic histories that defined the region in the 20th Century. Thus, while this class is nominally about Che Guevara, and his personal struggles, strengths, and foibles, it is really about much, much, much more.